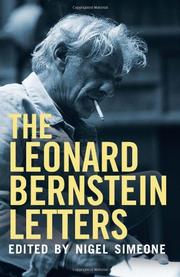 Nearly 60 years of revealing letters to and from the composer of West Side Story, a musical colossus who stood with one foot on Broadway, the other in whatever of the world’s symphony halls he wished.

Meticulously and even lovingly edited and annotated by Simeone, the author of Leonard Bernstein: West Side Story (2009), the volume begins in 1932 with a letter from the 14-year-old to his piano teacher, Helen Coates, who reappears throughout. Simeone does not reproduce every letter here (he focuses principally on Bernstein’s musical life), but even so, Bernstein’s list of correspondents is a virtual who’s who: Aaron Copland, Samuel Barber, Judy Holliday, Randall Thompson, Jerome Robbins, Bette Davis, Farley Granger (with whom he apparently had a fling), Lena Horne, James M. Cain, Martha Gellhorn, Arthur Miller, Aldous Huxley, Cole Porter, a 10-year-old Yo-Yo Ma, Thornton Wilder, and on and on. There’s also a touching late-life letter from Miles Davis, who wrote, “You are one of America’s true geniuses.” Indeed, Simeone also focuses—though softly—on Bernstein’s sexual identity (his wife was well-aware of his homosexuality) and includes a few letters mentioning the births of his children (much more appears in the footnotes). Bernstein was generally exuberant in his letters, reporting his podium successes around the world with great panache. He encouraged other musicians, was grateful for those who had helped him, and was generous to his collaborators. He and Robbins admit towering admiration for each other—though recognizing, as well, how they got on the other’s nerves. Simeone’s notes are numerous and thorough, and the letters become weighty with poignant and wrenching dramatic irony as we recognize the end nearing.

THE SELECTED LETTERS OF CHARLES DICKENS
by Jenny Hartley
Nonfiction