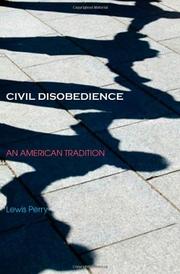 A historian traces the evolution of civil disobedience in America.

Following a graceful opening chapter centering on the relatively recent student strikes at Gallaudet University, a discussion that introduces a number of recurring themes and controversies inhering in civil disobedience, Perry (Emeritus, History/Saint Louis Univ.; Boats Against the Current: American Culture Between Revolution and Modernity, 1820-1860, 1993, etc.) embarks on a chronological journey, beginning with the Boston Tea Party up through today’s opposition to the Keystone Pipeline. Choosing to violate an unjust law, he demonstrates, is a tricky business. Is retaliation to violence ever justifiable? Destruction of property? Must disobedients willingly accept the full penalties under the law? There is no “right” to civil disobedience—the Constitution makes no mention of it—yet this practice of citizen resistance to government, a gesture situated somewhere between majority rule and revolution, has flourished in America. Civil disobedience has famously been invoked to oppose war and slavery, to support temperance, voting rights and labor reform, and to protest taxes, nuclear power, abortion and various environmental abuses. Perry highlights the stories of some famous disobedients in our history—Angelina Grimké, Bronson Alcott, Henry David Thoreau, Susan B. Anthony, Rosa Parks and Martin Luther King Jr., among many others—but the charm of this treatment lies in the tales of lesser-known practitioners: the missionaries who opposed the removal of Georgia’s Cherokees, black abolitionists who worked for the extirpation of slavery, the elderly Connecticut sisters who, denied the right to vote, refused to pay their taxes, the Vanderbilt divinity school student expelled for his part in lunch counter sit-ins. Obviously well read in the literature of civil disobedience, Perry brings a calm eye to this not-so-genteel topic, where the encounters between opposing forces have oftentimes been anything but civil.

An agreeable mix of scholarly explanation and good storytelling.

WHY NOT EVERY MAN?
by George Hendrick
Nonfiction

CRISES OF THE REPUBLIC
by Hannah Arendt
Nonfiction