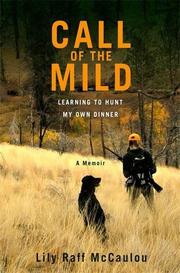 CALL OF THE MILD

Eloquent debut memoir about a young woman's transformation from a New York City urbanite into a small-town Oregon hunter with a conscience.

In her mid 20s, journalist McCaulou suddenly found that her job as an independent film production assistant had lost its charm. While the work put her in contact with indie stars and “fun, artsy people” all over New York City, she couldn't get away from the feeling that what she was doing was “one big, glitzy distraction.” On a whim, McCaulou accepted a job at a Bend, Ore., newspaper. She thought the experience would offer her a much-needed change of scenery and a new arsenal of journalistic skills. What she discovered was a lifestyle that, though “a distant cousin” to the one she had known, proved far more satisfying than anything she imagined. As she learned to fly-fish, McCaulou wrote articles about natural resources and the environment. One topic that intrigued her was hunting, which she had long associated with cruel and indiscriminate killing. The more she researched this sport, the more she came to believe that true hunters, as opposed to poachers, were really “environmentalist role models.” To better understand their lifestyle, McCaulou decided to take up the sport herself.  She gradually grew to appreciate hunting for what it taught her about her relationship to the wilderness. Killing, and eating, a hunted animal created an intimate bond between her, another creature and, by extension, the land on which that creature lived. Throughout the book, the author shares her mostly profound insights.

A powerful story in which the author shapes a narrative of personal growth into a symbol of modern humanity's alienation from the natural world.

NO ANIMALS WERE HARMED
by Peter Laufer
Newsletter sign-up