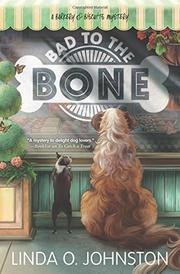 BAD TO THE BONE

After a friend’s romantic rival is killed, a dog-focused entrepreneur investigates.

Vet tech Carrie Kennersly’s true passion are her two bakeries: Barkery and Biscuits, an upscale boutique for her homemade treats for pets, and Icing, a similar store aimed at the pets’ human companions. The shops have been so successful that Carrie’s been talking with pet food manufacturer VimPets representative Jack Loroco about national distribution. She’s not sure whether Jack, who’s been spending a lot of time in town lately, is more interested in wooing her for VimPets or wooing her friend Billi Matlock for something else. Either way, Carrie understands completely. After all, she’s been getting more serious about veterinarian Dr. Reed Storme even though he’s technically her boss at the clinic. When Jack makes plans to meet Carrie at the local resort where her brother, Neal, works, Carrie isn’t sure if Jack’s intent on business or pleasure, especially when he invites Billi, Neal, and Reed to join the party. The evening takes a surprising turn when Jack’s VimPets colleague, Wanda Addler, announces over dinner that she and Jack are an item, shocking both Billi and Carrie. And that’s not all. Wanda, who’s in town to land Carrie as a client, is willing to trade Jack for Carrie’s recipes. Before Carrie can figure out who can offer her a better deal, Wanda’s killed, leaving Billi and Jack prime suspects. Even though Carrie wants to clear her friends’ names, Reed, ignoring her protests that her earlier luck (To Catch A Treat, 2016, etc.) bodes well, doesn’t want her involved in yet another mystery.

Veteran Johnston has her formula down, but her characters often come off as too Pollyannaish or persnickety to be believed—fixating on who orders alcohol with dinner or how to work a business meeting for a free meal—and so risk losing the affection of readers who hunger for more realistic motivation.

TO CATCH A TREAT
by Linda O. Johnston
Mystery

LOST UNDER A LADDER
by Linda O. Johnston

EGGS IN A CASKET
by Laura Childs
Mystery

A TOAST TO MURDER
by Allyson K. Abbott
Newsletter sign-up