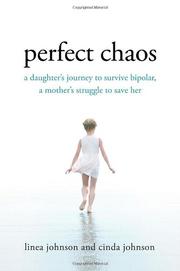 A Daughter's Journey to Survive Bipolar, a Mother's Struggle to Save Her
by Linea Johnson & Cinda Johnson
BUY NOW FROM
AMAZON
BARNES & NOBLE
LOCAL BOOKSELLER
GET WEEKLY BOOK RECOMMENDATIONS:

A no-holds-barred “biography of depression,” based on the alternating journal entries of a mother and daughter.

Cinda Johnson, who directs the special education graduate program at Seattle University, and her daughter Linea, a mental-health advocate and national speaker, jointly chronicle the first five years of Linea's ongoing battle to overcome the ravages of bipolar disorder. First diagnosed while in high school, Linea still battles “anorexia, anxiety, and depression,” but she explains that her episodes are now controllable. “My relationship with bipolar has evolved…My illness is part of me, it is something that affects my life,” she writes, “but it is something, not all. It is not my life; my life is merely affected by it. It does not define me if I don’t let it.” The author and her mother describe the evolution of her disease and the difficult struggle they both faced in coming to terms with it. Even though Cinda trained special-education teachers to deal with mental illness, she found it difficult to accept it in her own daughter, a popular high-achiever whose goal was to become a professional musician. This is a gritty account of what it is like to be down in the trenches with mental illness—fighting suicidal thoughts, battling the aftereffects of shock treatment, dealing with medication and its side effects and resisting the temptations of alcohol and street drugs. While Linea was battling for sanity, Cinda and her husband faced the difficult challenge of balancing their desire to protect their daughter with the need to respect her privacy and freedom. Ultimately, it was Linea who decided to give up her career aspirations, move back to Seattle from Chicago, where she had been attending college, advocate for the mentally ill and work to “create a world free of stigma.”

A simultaneously painful and inspiring page-turner.

NOTHING WAS THE SAME
by Kay Redfield Jamison
Nonfiction

DIARY OF A STAGE MOTHER'S DAUGHTER
by Melissa Francis
Nonfiction