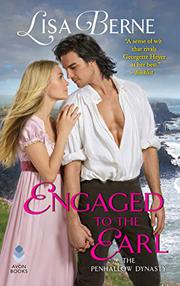 ENGAGED TO THE EARL

After landing one of Regency London’s most eligible bachelors, a debutante begins to question her decision when a childhood friend returns to England after years of self-imposed exile.

Years ago, when she was 14 and her family was frightfully poor, Gwendolyn Penhallow asked her 17-year-old neighbor, Christopher Beck—who’d inherited a fortune from his uncle—to run away and marry her, saving her family financially and helping Christopher escape his complicated relationship with his father. Unfortunately, he wouldn’t come into the money until he was 21, so the plan wouldn’t work. Instead, Gwendolyn’s older brother Hugo married an heiress (The Bride Takes a Groom, 2018), and Christopher ran away to make his way in the world. He returns to London just as Gwendolyn is enjoying her first season and has accepted the hand of the Earl of Westenbury after they saw each other from across the room at Almack’s and fell in love at first sight. Gwendolyn is blissfully happy until Christopher comes back to town, and then she meets her future mother-in-law. Christopher is composed and comfortable in his own skin. Meanwhile, the more time Gwendolyn spends with her fiance, the more she realizes they won’t suit: “Perhaps that might sustain him for a lifetime—that kind of superficial adoration—but it wouldn’t me.” Berne’s latest Penhallow title is another sophisticated, elegantly written study on character and love, slightly undermined by a romantic misunderstanding with a secondary character that feels far-fetched given the otherwise exemplary intelligence and insight of the main couple. Nevertheless, the subtle comparison of the quick “love at first sight” romance versus the slow-building, deep-rooted love between characters is lovely and satisfying.

THE BRIDE TAKES A GROOM
by Lisa Berne
Fiction

THE LAIRD TAKES A BRIDE
by Lisa Berne
Fiction

YOU MAY KISS THE BRIDE
by Lisa Berne

ONCE A REBEL
by Mary Jo Putney
Fiction

FOREVER AND A DUKE
by Grace Burrowes
Newsletter sign-up