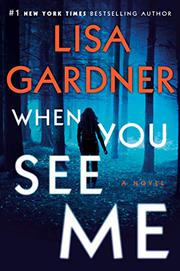 WHEN YOU SEE ME

Three Gardner fan favorites—FBI agent Kimberly Quincy, Sgt. D.D. Warren of the Boston Police, and serial-killer–survivor–turned-vigilante Flora Dane—team up to untangle a series of murders, and lots of small-town secrets, in the Georgia hills.

On a hike in the hills outside the quaint tourist town of Niche, Georgia, a couple finds the partial skeletal remains of Lilah Abenito, who went missing 15 years ago. Lilah was thought to be one of the first victims connected to Jacob Ness, who kidnapped Flora eight years ago when she was a Boston college student and held her captive, mostly in a coffin-sized box, for 472 days. The chance to link the deceased Ness to additional crimes is impossible to pass up, and FBI agent Kimberly Quincy invites D.D., Flora (who is a confidential informant for D.D.), and computer analyst Keith Edgar, Flora's friend/love interest, to be part of her task force. A search through the hills turns up a mass grave full of more skeletal remains. While D.D. is updating the mayor, Howard Counsel, and his wife, Martha, who own the charming Mountain Laurel B&B, she becomes interested in their timid, fearful maid, a young Hispanic woman who's brain damaged and unable to speak following a car accident when she was a child. When Martha suddenly hangs herself (or so it seems), D.D. realizes something very odd is going on at ye olde B&B. Gardner juggles multiple narratives, including that of the Counsels’ nameless maid, with ease. However, the involvement of two civilians in a major federal task force is initially hard to swallow, as are a few supernatural elements Gardner (Look for Me, 2018, etc.) shoehorns in. But Flora’s tentative romance with Keith and her realization that she might finally be thriving, not just surviving, are bright spots, as is Gardner’s evolving and sensitive exploration of trauma and its insidious, lasting effects.

These characters are so beloved that readers may not mind when a few twists veer dangerously close to the absurd.

LOOK FOR ME
by Lisa Gardner
Fiction

RIGHT BEHIND YOU
by Lisa Gardner
Fiction

FIND HER
by Lisa Gardner
Fiction

FEAR NOTHING
by Lisa Gardner
Fiction