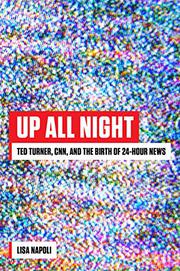 The origin story of CNN, the success of which demonstrated the public’s “voracious appetite for news it didn’t even know it had.”

At the center of this tale, of course, is Ted Turner (b. 1938), the unpredictable Atlanta-based billboard advertising tycoon who refused to believe the countless observers who argued that a 24-hour news network was a crazy idea that would never last. Throughout the 1970s, Turner began acquiring obscure, underperforming radio and television properties. As he gradually learned about the dissemination of news, he wondered whether the burgeoning cable-TV technology could become the foundation for nonstop news from around the world. With masterful reporting and clear prose packed with memorable anecdotes, Napoli, who began her career in 1981 as an unpaid intern at CNN in New York and whose previous book chronicled the lives of Ray and Joan Kroc, crafts a multipronged business thriller: How will Turner raise adequate money to back the risky venture? Will his lack of diplomacy, bizarre personal behavior, and sometimes-offensive beliefs sabotage his ability to hire anyone capable of making his vision a reality other than visionary Reese Schonfeld (co-founder of CNN and the Food Network)? Is there enough news to fill the screen 24/7? Will an adequate number of potential viewers install cable TV to sustain CNN beyond the first year? As the author develops the journalistic and financial angles related to the development of CNN, she skillfully works in tangential ventures, such as Turner’s strategic purchase of the Atlanta Braves and his travels to Cuba, where he met with Fidel Castro. The narrative starts to wind down in 1987, when Turner sold a major stake in his empire to Time Warner. (His marriage to Jane Fonda receives little attention.) AT&T purchased Time Warner in 2019, “but CNN survives,” writes Napoli in closing, “and not even the mighty phone company can obliterate its founding story, nor the spirit of exploration that created it.”

A page-turning hybrid of biography, media analysis, and business history.