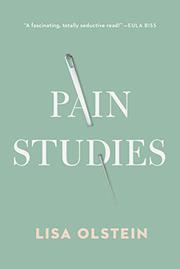 A meandering yet erudite exploration of the representation of chronic pain in history and popular culture.

Olstein (English/Univ. of Texas; Late Empire, 2017, etc.) suffers from chronic migraines. In total, she estimates, she has had a headache for 9.5 years of her life. Throughout this slim, perceptive book, she wrestles with the challenge of expressing something that is essentially indescribable: “all pain” is “unknowable except while being lived.” As a poet, the author employs lyrical language (“left brow like a pressed bruise, an overripe peach you accidentally stuck your fingers into; top of head a china vase in a vise tightening, all angled echo and clamor”) as well as rhetorical questions and litanies in the attempt to characterize her pain. She includes alarmingly extensive lists of incidental migraine symptoms, medicines and therapies she has tried (“our fickle, beloved cures”), and side effects she has experienced. Her surprising points of reference range from Antiphon, the ancient philosopher who taught pain avoidance, to the TV show House, which starred a pain pill–gobbling misanthrope who solved medical mysteries. It’s harder to appreciate the relevance of a long discussion of Joan of Arc. Olstein seems to take Joan as a model for women speaking out in defense of their subjective experiences (in Joan’s case, hearing voices). All the same, the passages from her trial transcript are overlong. In general, Olstein relies too much on quotations from other thinkers—though, surprisingly, not Susan Sontag. While the book joins a conversation rekindled by Anne Boyer, Leslie Jamison, and other contemporary authors, it is not quite as memorable as its antecedents. Still, Olstein’s blending of the personal and the academic is compelling, and her themes of catharsis, denial, and causality are well worth exploring. “Does our pain define us?” she asks. Ultimately, she concludes that pain has no essential meaning and is all up to chance. Yet there is dignity in resisting it—and in capturing it in words.

A quality addition to the literature on pain.