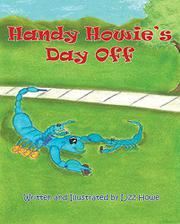 Howie, a blue lobster, works hard at his repair work, but he looks forward to spending his day off with his two sons. On that day, Howie and the boys first head to the library, but on the way they encounter Helen, a hen, whose motorcycle’s loose shocks are causing her eggs to bounce in her sidecar. “My Daddy can fix that!” one of Howie’s sons exclaims, and he does so, “to the cheers of his boys.” The story’s repeating pattern is quickly set: Everywhere they go, Howie encounters something else that needs fixing. Despite this, he and his children still have a great day together, and one son even demonstrates his own handiness by repairing a tricycle. Howe’s simple rhyme scheme flows smoothly, and her brightly hued, cartoonish illustrations are consistently delightful. Tool lovers may miss the detailed, realistic drawings of Howie’s equipment—a highlight of the first book—but Howie’s relationship with his sons strikes an appealingly personal note. The protagonist and his sons are male, but they encounter a roughly equal number of male and female animals during the story.

Returning readers will delight at the further adventures of Howie, which focus on his loving relationship with his kids.