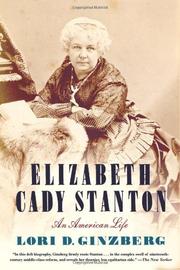 A well-documented, well-balanced account of the life of “the founding philosopher of the American movement for woman’s rights.”

Ginzberg (History and Women’s Studies/Penn State Univ.; Untidy Origins: A Story of Woman’s Rights in Antebellum New York, 2005, etc.) offers a full-length portrait of a brilliant, confident, assertive woman for whom raising seven children was no bar to remarkable activism in the cause of women’s rights. The author shows us Stanton in her many roles: child, wife, mother, author and campaigner. At the International Anti-Slavery Convention in London in 1840, Stanton was outraged to discover that women were not allowed to participate. Eight years later, in Seneca Falls, N.Y., she helped organize the first women's-rights convention. Stanton drafted the convention’s Declaration of Sentiments, which was modeled on the United States Declaration of Independence and proclaimed that men and women are created equal. For years she and Susan B. Anthony collaborated, with Stanton primarily writing and Anthony traveling and speaking. After the Civil War, the two women broke with their former colleagues, the abolitionists, and lobbied against granting African-American men the right to vote, with Stanton arguing that the votes of educated women were needed to offset those of former slaves. Ginzberg notes that the image this created of the woman’s suffrage movement as primarily concerned with the rights of middle-class white women was not entirely false. When her children were older, Stanton traveled extensively on the lecture circuit, where she campaigned vigorously for the property rights of married women, for equal guardianship of children and for liberalized divorce laws. Deploring the position of women within organized Christianity, she wrote The Woman’s Bible to correct the sexism she found in scripture. Despite her flaws of elitism and racism, Stanton, Ginzberg argues, used her powerful intellect and her persuasive prose to challenge the nation to see women as full citizens.

Brings to life a complex woman whose place in the history of women’s rights has been somewhat overshadowed by that of her colleague Susan B. Anthony.