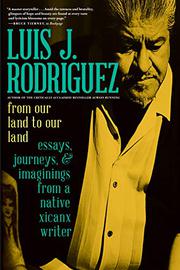 FROM OUR LAND TO OUR LAND

A distinguished Mexican American writer meditates on the place of Xicanx culture in what he sees as a sick and increasingly fragmented global society.

Reacting in part to the political upheaval and chaos that have characterized the last decade, Rodriguez (Borrowed Bones: New Poems From the Poet Laureate of Los Angeles, 2016, etc.) offers 12 essays that reflect on the meaning of identity while offering a vision of a more humane world. In “The End of Belonging,” the author responds to Donald Trump’s anti-immigrant, anti-Mexican rhetoric by celebrating his Native American ancestry, which predated the European conquest of the Americas. As the descendent of Indigenous people, he sees himself as a child of the Earth who transcends the fabricated boundaries of nation. “I belong anywhere,” he writes. To counterbalance what he sees as the disease of capitalism brought to the Americas, Rodriguez advocates for a new “mythic imagination” in the essay titled “The Four Key Connections.” Through myths, people can find “sustenance for mind and soul.” Poetry is another avenue of healing the author believes society should explore. In “Poet Laureate? Poet Illiterate? What?” he discusses poetry as “medicine” that can not only “impact [but] change this world.” Throughout the book, Rodriguez speaks about Xicanx cultural achievements with pride. In “I Still Love H.E.R,” he discusses the Xicanx–hip-hop connection and the influence of that connection on recording artists around the world. In “Low & Slow in Tokyo” he describes the impact of Xicanx popular culture on anti-establishment Japanese youth. In speaking about himself, Rodriguez is, as always, honest and forthright. In “Men’s Tears,” he speaks openly about his violent gang past and the lesson he eventually learned that “men should cry more, connect more, feel more.” “The Story of Our Day” details the author’s unsuccessful but impactful 2014 Green Party bid for California governor, a campaign that emphasized nothing short of revolutionary change. Powerful from start to finish, Rodriguez’s book celebrates Xicanx culture and wisdom while calling for much-needed global healing.

A thoughtful and radically provocative collection.

IT CALLS YOU BACK
by Luis J. Rodriguez
Fiction

MUSIC OF THE MILL
by Luis J. Rodriguez
Fiction

THE REPUBLIC OF EAST L.A.
by Luis J. Rodriguez
Adult

IT DOESN'T HAVE TO BE THIS WAY
by Luis J. Rodriguez
Nonfiction