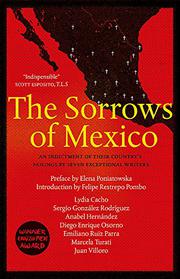 THE SORROWS OF MEXICO

A steely band of courageous Mexican journalists respond to the violence and corruption overwhelming their country—to great personal and professional peril.

In a series of elucidating and chilling dispatches, expertly translated by a variety of translators, seven well-respected journalists reveal Mexico’s “suppurating wound,” as described by Elena Poniatowska in the powerful preface. Each of the pieces in this work shows an absolute assault on justice and human rights: narcotics trafficking, organized crime, sex trafficking, femicide, violent peasant land struggles, disappeared youth, egregious government coverups, torture, and widespread murder. A recent haunting crime that overshadows several of these dispatches is the Sept. 26, 2014, abduction and disappearance of 43 students on their way to Ayotzinapa Rural Teachers’ College in Guerrero, one of the most violent narcotics trafficking states in Mexico. In “Collateral Damage—Living in Mexico,” Juan Villoro, a weekly columnist for Reforma, chronicles the horrendous violence that has overwhelmed the country since President Felipe Calderón’s disastrous war on drug trafficking began in 2006. “The problem…had been around for a long time,” he writes. “But the strategy failed. We were sitting on dynamite and Calderón lit a match to prove it.” In a developing country like Mexico, where a handful of families control the wealth, there is little opportunity for youth to advance outside the cartels, which provide what Villoro calls a sense of “identity and shared codes.” The crimes these journalists delineate seem to have no rhyme or reason save desperation and poverty—e.g., the young women pressed into sex slavery by boyfriends, documented by Diego Enrique Osorno in “Lily Sings Like a Little Bird.” Marcela Turati’s “War Made Me a Feminist” is a heart-rending look at how the violence has devastated women, mothers especially. With a recorded 94 journalists murdered in Mexico between 2000 and 2016 (documented in an appendix), the country has become one of the deadliest places to practice that profession.

Though brief, this collection of urgent reports deserves a wide audience—and not just in Mexico.

THE REEF
by Juan Villoro
Nonfiction