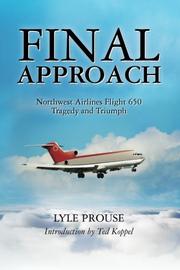 More than two decades after his prosecution and imprisonment for operating an aircraft while intoxicated, a Northwest Airlines captain breaks from the media frenzy surrounding his firing and public humiliation to offer his own version of events.

Prouse, whose childhood in Wichita and other cities in the Midwest and South was marred by the “cotton-mouthed fear” of facing neighborhood bullies and the troubles of alcoholic parents, provides a memoir that skips alternately between his becoming a pilot in the Marines and the lapse of judgment that undid everything he had earned. After graduating high school, Prouse joined the Marines and was selected to receive flight training at a military institution in Pensacola. A stint at Marine Corps Air Station El Toro followed in 1963, as did employment during the Vietnam War flying combat missions, before Prouse departed the military to pursue work as a commercial pilot in 1968. His noteworthy career came to a halt in 1990, when he was arrested upon landing a flight in Minneapolis after a night of hard drinking with his colleagues. He was charged and sent to prison. Prouse stares steadfastly into his own history as an alcoholic, detailing even the most traumatic events with a remarkable self-awareness; he explains without excuse how his alcoholism strained his relationship with his wife and almost severed his relationship with his daughter, Dawn. Prouse, who obtained a presidential pardon for his mistake and eventually regained captain status with Northwest Airlines, constructs prose strengthened by sharp anecdotes. However, the flow of Prouse’s story line can become stagnant under the weight of several tedious or obtuse passages. Although the divergences between the book’s dual narratives can distract or appear incongruous, Prouse’s recollection of his incarceration ultimately succeeds in indicting the prison system for corruption, sadism, incompetence and unsafe operations.

An endearing retrospective, beginning and ending as one man’s examination of a tragic segment of his life, which comments meaningfully on addiction and the unpredictable nature of bureaucratic systems.

I HAD TO SURVIVE
by Roberto Canessa
Nonfiction

THE ANATOMY OF ADDICTION
by Morteza Khaleghi
Newsletter sign-up