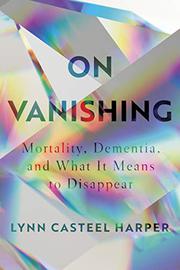 A compassionate collection of essays examining dementia from an unusually hopeful point of view.

As a Christian minister and chaplain, first-time author Harper has spent considerable time working in assisted living and memory loss facilities with those experiencing varying degrees of dementia. Initially reluctant, like many of us, to deal with older people experiencing the disease, she gradually began to understand those she worked with as complicated people and to think about the many ways in which our misunderstanding of dementia leads us to stop paying attention to those affected by it—to see them as “vanishing” before they actually die. In fact, argues the author, they are vividly alive and sensitive to the presence of others and often capable of increased “compassion, honesty, humility.” In these essays, some of which were published in various journals, Harper explores with an open mind and empathetic imagination the question of why “we—those whom the dementia activist Morris Friedell termed the 'temporarily able-brained’—need them to vanish. Why are we so eager to view them as disappearing or disappeared?” She explores how our often unconscious biases lead us to assume that people are “gone” when they are actually right in front of us, longing for connection. She ponders the possible link between Shakespeare's King Lear and dementia, considers Ralph Waldo Emerson's relatively peaceful encounter with the state, and reflects on her own experience of sleepwalking and the ways it helps her understand dementia. “While I do not presume I can or should know in full the experiences of another,” she writes, “I wondered if sleepwalking might be one point of correspondence.” Harper moves smoothly between abstract reflections and concrete experiences, reflecting often on the effects of dementia on her grandfather and on her relationship with him, her fears that a genetic link to the disease may have been passed down to her, and her encounters with many individuals, all described in strikingly specific terms, surviving dementia in their own ways.

Helpful, sometimes moving insights into a situation many will face.