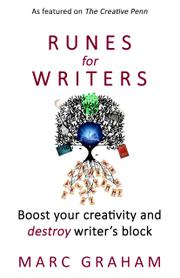 An accomplished novelist shows writers how to conjure creativity in this writers’ guide.

Shamanic practitioner Graham (Son of the Sea, Daughter of the Sun, 2019, etc.) has authored several well-received novels, and in this nonfiction work, he draws on principles from the ancient practice of “runecasting” to give other writers a tool that isn’t found in typical, craft-oriented writing guides. His system clearly isn’t intended for beginning writers, as it skips fundamentals and plunges into more advanced challenges, such as deciding what should happen to a character, rather than how to create them. Runecasting, he says, is a psychological method that can unlock stalemates in a writer’s mind by accessing thoughts in the subconscious. The practice, he says, derives from Viking culture, in which runecasting—usually done with cards, stones, or tiles—was a way to seek guidance from the gods. Each of the 24 characters in the runic alphabet carries symbolic meaning; using Graham’s method, a writer formulates a story-related question, casts the runes, and interprets their insights. One may be forewarned, for example, that unless a character changes his ways, he’s headed toward a trap. Although this book is fewer than 150 pages in length, it’s certainly not a quick or breezy read. Readers who may be tempted to skip around the manual will find it similar to falling asleep during a movie: When one wakes up, the story no longer makes sense. Graham illustrates his rune-card reading with sample layouts, and provides interpretations based on specific story ideas that he proposes. Each of these scenarios are richly imagined and easy to understand, but writers shouldn’t go into this book expecting a simple formula for how to write. Runecasting requires writers to do the heavy lifting of interpreting the messages that they receive. The author does note that the overall concept of his book may strike some readers as “a bit woo-woo.” However, he does offer an intriguing way for readers to ward off what every author dreads: writer’s block. That, in and of itself, makes the book invaluable.

A worthwhile method for seasoned writers to try.

SON OF THE SEA, DAUGHTER OF THE SUN
by Marc Graham
Indie