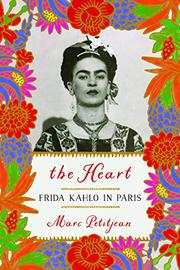 A breezy bit of art history about a 1939 affair between the author’s father and Frida Kahlo in Paris.

Combining both research and conjecture, photographer and documentary filmmaker Petitjean attempts to retrace the circumstances of this underdocumented romance. Frida visited Paris in 1939; she left an adulterous Diego Rivera back in Mexico and found herself on an emotional threshold before her European debut in André Breton’s exhibition of Mexican art. While Breton and other surrealists fetishized her foreignness, Michel Petitjean, the author’s father and local gallerist, saw beyond that surface impression. Michel and Frida had a short affair, during which she gave him a small painting called The Heart, which was a fitting token for the man who, for once, saw all of her. The painting, writes the author is “a concentration of the key characteristics in [her] art and her biography: intimacy, identity, physical and psychological suffering, references to Mexican culture, and references to art history.” While the story is transportive and dreamy, the author’s awkward sequencing of facts and loose creative license muddle the scholarly authority. For example, Petitjean doesn’t explain until near the end of the narrative that his father studied Mexican civilizations at the Museum of Ethnography. Stylistically, he often embellishes: He remarks on the subtle implications of Breton’s “tone of voice” and, elsewhere, imagines mental pictures in his father’s mind. He also writes that, one morning during a pain spell, Frida “contemplates each of her organs in turn.” Petitjean is undeterred by a lack of concrete sources: “I do not have any information to know for sure…but by cross-checking the whereabouts, circumstances, and personalities of the protagonists I will attempt to reconstruct the scene.” While prefacing another tangent, he writes, “I imagine, but I may be wrong.” While his heart’s in the right place, the author’s penchant for stylized prose often overwhelms the book’s more academic qualities.

A lightly investigative biography about a painting’s provenance and its hidden romantic history.

IF
by Lise Marzouk
Nonfiction

THE ONLY GIRL IN THE WORLD
by Maude Julien
Nonfiction

THE PEN AND THE BRUSH
by Anka Muhlstein
Fiction

THE GARDENS OF CONSOLATION
by Parisa Reza
Newsletter sign-up