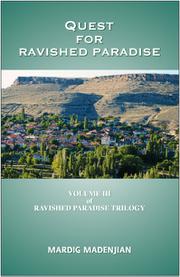 A writer returns to the Turkish city from which his Armenian family was expelled in this final volume of a memoir trilogy.

Madenjian’s (Ravished Paradise, 2016, etc.) father, Hovsep, liked to describe Chepni, a small city in Turkey, as an “earthly paradise,” a fond label for a place from which he was summarily expelled. The author was given an opportunity in 2007 to travel there in order to see for himself the “ancestral lands” Hosvep once called home before his property was stolen and he was compelled to start a new life in Lebanon. Madenjian wrote to the mayor, Huseyin Erdal—who insisted Chepni was the “world’s most modern place”—to procure a map and prepare arrangements for a visit. He was greeted by an odd mixture of warm hospitality, curiosity, and wary suspicion by the city’s inhabitants, some of whom seemed to believe he was there looking to recapture lost property or gather witnesses. But the author’s principal motivation was to see the “Forced March to Nothingness,” the road to the desert his parents were forced to walk into exile. Displaying an impressive mastery of the genocide perpetrated in 1915, Madenjian completes the history of the Armenians’ plight in Turkey he began in the first volume of this trilogy, sometimes referencing (and reproducing) his father’s memoirs from the ’20s. The author takes readers on a historically enlightening, if embittered, search for the reasons why the Armenians, particularly his own family, were so thoroughly betrayed by their neighbors. As in the first two installments, Madenjian’s unflinching quest can be poignantly powerful. His account of Armenian suffering is as affecting as it is edifying. But also following the model of its predecessors, the book inters readers under mounds of microscopic details, an informational burial that proves exhausting. Further, his implacable rage often clouds his judgment, the result of which is indefensibly broad attacks on whole groups of people: “I would be happy if not a single Kurd remained in the world. What did they bring to humanity until now other than misery and killings?”

A riveting personal account and vivid exploration of Armenian history diminished by prejudice.