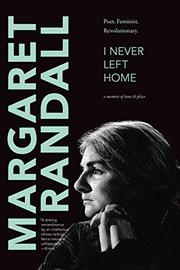 A revolutionary woman and remarkable writer places her long journey within the context of her conflicted past and our own divided present.

Naming one book by Randall (Exporting Revolution: Cuba’s Global Solidarity, 2017, etc.)—or even 10 (she has published more than 150)—doesn’t begin to scratch the surface of her oeuvre, let alone summarize her impressive arc as a person. The author has always been busy and prolific, whether as a well-known poet, an active participant in Latin America’s revolutionary culture, a mother, or simply a woman who has experienced multiple awakenings during her 83 years on Earth. This memoir, more generalized than her writings about Cuba or her later years in Albuquerque, not only covers her life, work, and personal evolution, but also provides a sampling of her poetry, photographs, and reflections on the suffering endured by immigrants around the world and the bravery of those honored few who stand up to tyranny. “I want to do more than showcase a singular journey,” Randall writes. “None of us are separate.” The author’s compassion for her fellow humans is always on display, but this is a cinematic story infused with Randall’s intellectual spirit. Born in New York City, Randall found her way around the world, interacting with other writers and artists, raising children, and fighting the good fight in Spain, Mexico, Cuba, and Nicaragua. Though the narrative contains numerous luminaries—Alan Ginsberg, Alice Walker, Arthur Miller, among others—Randall is uninterested in name-dropping. Where the book gets most interesting—and relevant to today—is when the author describes how she was deported in 1984 because “the government claimed that my writing went ‘beyond the good order and happiness of the United States.’ ” She didn’t win her case until 1989, with the assistance of numerous writers, including Adrienne Rich, Audre Lorde, Kurt Vonnegut, Gray Paley, Carlos Fuentes, and Norman Mailer. “The use of immigration law as a political weapon continues,” writes the author. “Only its victims have changed.”

A striking remembrance by an intellectual whose radical, fierce nature is unflappable.

THE PRICE YOU PAY
by Margaret Randall
Newsletter sign-up