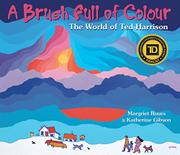 A BRUSH FULL OF COLOUR

“Painting is the last great freedom. You can paint what you like.”

Born in northern England in 1926, Harrison began his career as a classically trained painter who eagerly embraced the freedom of post–World War II military service in India, Africa, Malaysia and New Zealand. Propelled by his youthful love of Jack London, he accepted a teaching position in northern Alberta, moving his family there in the late 1960s. In the clear, Canadian light, he soon adopted a vivid palette to portray a new, northern vision of vast skies, low horizons, luminous aurora borealis, vivid sunrises and sunsets. His work featured First Nations totemic imagery and large bands of color. His forms became organic, and strikingly simple figures and buildings were now strongly outlined in black. After a slow start, his work became increasingly popular, and he began illustrating children’s books in the 1980s, including two by another childhood favorite, Robert Service (The Cremation of Sam McGee, 1986, and The Shooting of Dan McGrew, 1988). Abundantly illustrated, the generally lively text is accessible and well-paced, and (thankfully) the didactic asides and discussion prompts are relegated to the paintings’ captions. Backmatter includes a helpful index and related books, websites and films.

BUS TO THE BADLANDS
by Margriet Ruurs
Children

BIRTHDAYS AROUND THE WORLD
by Margriet Ruurs
Children

SCHOOL DAYS AROUND THE WORLD
by Margriet Ruurs
Children

FAMILIES AROUND THE WORLD
by Margriet Ruurs

THE FANTASTIC JUNGLES OF HENRI ROUSSEAU
by Michelle Markel
Children