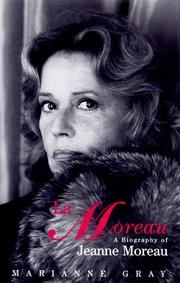  Like a five-and-dime store, this perfunctory biography of French leading lady Moreau lays everything out, but nothing is particularly valuable. Moreau, along with Catherine Deneuve and Brigitte Bardot, was one of a trio of French actresses/femme fatales who achieved international stardom in the 1960s and helped revitalize French cinema. Sexy, intelligent, effortlessly talented, she worked with some of the world's greatest directors, from Orson Welles to Franáois Truffaut to Louis Malle, and some of her films, such as Jules and Jim and Chimes at Midnight, have become celebrated classics. She also made a huge number of duds and was relentlessly typecast as a prostitute or seductress. As with many actresses, time has not been kind to her. Every year the roles have grown fewer and less involving, and so the woman who gave a powerful, groundbreaking portrait of female sexuality in The Lovers was, 25 years later, reduced to playing raunchy grandmothers. In Gray (Depardieu, not reviewed), Moreau has a sympathetic but overly tactful biographer. Gray's extensive interviews with her subject seem to have produced a kind of biographical Stockholm Syndrome, causing her to gloss over or finesse subjects Moreau finds distasteful: ``Her son, JÇrìme, who has always been kept in the background, is a forbidden subject.'' And so we hear almost no more about JÇrìme. Even Moreau's high-flying affairs with everyone from the usually homosexual Pierre Cardin to Marcello Mastroianni are handled with too much reticence. Gray also tends to a breezy passivity, a reluctance to do the necessary spadework of research; e.g., she freely admits that she has only seen two-thirds of Moreau's films. Gray has certain narrative gifts, but this is simply not a thorough biography. (16 pages b&w photos)