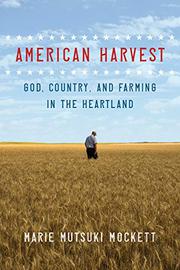 Mockett (Where the Dead Pause, and the Japanese Say Goodbye, 2015, etc.) is a child of “the coasts: seventeen years in California, four years of college in New York City, more years of ping-ponging between the East and West Coasts,” the kind of person likely to think of the territory in between as flyover country. Yet, with a Japanese mother and High Plains father, she knows that ground well, having spent summers on a family farm that spilled over from Nebraska into Colorado. The author returned to explore the work of itinerant contract or “custom” harvesters whose “routes across state lines were established by men, who handed down their itineraries to their sons, and harvesting became a family business.” Traveling with one such family across the center of the country, Mockett analyzes the divides between rural and urban, religious and apathetic or atheistic, conservative and liberal. Even in her own family, she writes, those differences were profound, but what is a bicoastal, educated person to make of someone who believes “that man was around at the time of the dinosaur”? Refreshingly, the author finds that conversation is just the thing; with it, some stereotypes shade away or at least become more complicated, as with that young fundamentalist who also maintained that if someone is pro-life, “they would help children, not just abandon them.” On the other hand, some farmers and harvesters spend their off time at the Omniplex, a sprawling science museum in Oklahoma City, and some hold education and the “uncharted world” in our minds in esteem while others hold the Bible to be the sole truth. What some city sophisticates dismiss as monoculture, many country people praise as progress. Throughout, Mockett’s portrait is nuanced, revealing those overlooked people in counties likely to have voted for the sitting president to be worth paying attention to.

A revealing, richly textured portrait of the lives of those who put food on our tables.

WHERE THE DEAD PAUSE, AND THE JAPANESE SAY GOODBYE
by Marie Mutsuki Mockett
Fiction