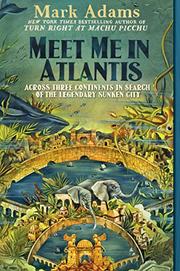 MEET ME IN ATLANTIS

Fun, enthusiastic exploration of the fabled lost city of Atlantis and the fascinating group of diverse personalities who have dedicated their lives to proving its existence.

In the world of comics, Atlantis is a fantastical underwater city where blue-skinned denizens thrive deep below the ocean waves. But according to Plato, Atlantis was once a very real civilization, which, despite its unparalleled greatness, ultimately fell prey to a catastrophic natural disaster and was erased from the face of the Earth. Plato wrote about Atlantis, although cryptically, in two separate works following the completion of The Republic. More than 2,000 years later, the great philosopher’s words continue to resonate, spurring wide-eyed explorers to fan out across the globe searching for antiquity’s mysterious “Sea People.” Some see Atlantis and its telltale concurrent rings on the coast of Morocco. Some see it on the island of Malta. Still others insist that Santorini, Greece, is the spot. Adams (Turn Right at Machu Picchu: Rediscovering the Lost City One Step at a Time, 2011, etc.) isn’t quite sure about any of the possible locales or even if Plato was being literal and not just figurative when he wrote about the mighty kings and their awe-inspiring navy. However, it’s clear that the author, a serious journalist who nevertheless grew up on Leonard Nimoy’s In Search of… TV series, wants to believe that mighty Atlantis is indeed waiting to be rediscovered. The collision between Adams’ youthful zeal and journalistic sensibilities provides an arresting dichotomy to an absorbing search. If Plato himself remains nebulous, how reliable are the amateur sleuths and part-time archaeologists who insist that Atlantis must exist as something more than mere allegory? The uncertainty kept Adams off-balance throughout the quest, but it never dampened his spirit of adventure.

Fact or fiction, Atlantis, as the author ably demonstrates, still has the power to enthrall inquiring minds.

TIP OF THE ICEBERG
by Mark Adams
Nonfiction

PRINCE LESTAT AND THE REALMS OF ATLANTIS
by Anne Rice
Nonfiction

ABOVE THE LINE
by Shirley MacLaine
Nonfiction

THE SEARCH FOR ATLANTIS
by Steve P. Kershaw
Newsletter sign-up