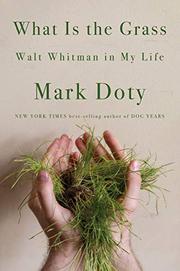 WHAT IS THE GRASS

A renowned poet uses Walt Whitman’s poetry to mirror his own life and to demonstrate the power of words.

Doty, who has won the National Book Award for Poetry (2008) and numerous other prizes, is the author of 10 poetry collections (Deep Lane, 2015, etc.) and three memoirs (Dog Years, 2007, etc.). In this new volume, the author combines biography and poetical analysis of Whitman (whom he’s greatly admired for most of his life) with autobiographical material, much of which details his romantic and domestic relationships with men. Throughout, Doty displays a number of his gifts and writing techniques. He chronicles his visits to sites relevant to Whitman’s story, including Brooklyn; Manhattan (“New York pulls me up out of myself, just as it must have done for Whitman”); his final home in Camden, New Jersey; and his impressive tomb in Camden, which, Doty writes, Whitman visited while it was under construction. He reveals a profound understanding of Whitman’s life and poetry, paying close attention to “Song of Myself,” “Calamus,” “Crossing Brooklyn Ferry,” and others. Doty also alludes periodically to other poets (especially Hart Crane and Emily Dickinson as well as some contemporary colleagues) and discusses Whitman’s friendships with Bram Stoker and Oscar Wilde. Through Doty’s eyes, we see Whitman not only as the writer who transformed American poetry (Doty credits him for inventing free verse), but as a tireless self-promoter (he reviewed himself from time to time) and as a man of many passions. Fans of Whitman will surely enjoy Doty’s extensive passages of exegesis, and many readers will admire the author’s occasional descriptions of his own revisions of his ideas about Whitman’s diction and poetic design. Throughout, the author exudes an exuberance about life and words that rivals that of his subject. Also informative (and necessary) are Doty’s evocations of 19th-century Brooklyn and New York City.

A captivating paean to Whitman combined with an unblinking self-examination.