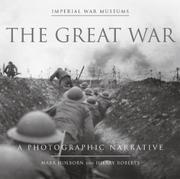 A stunning collection of images from all fronts, all points of view, during the war to end all wars, 1914–1918.

Holborn (who has edited other photographic collections—e.g., George Harrison: Living in the Material World, 2011, etc.) and Roberts (head of Collections of the Imperial War Museums’ photography archive and co-editor of Cecil Beaton: Theatre of War, 2012) have assembled and precisely identified some 500 pages of images that will evoke every emotion of which a human is capable. They have written brief introductory and concluding essays—and even briefer introductions to each of the five major divisions—as well as multidimensional chronologies. But mostly, the images, arranged chronologically, speak eloquently for themselves. We see soldiers marching off to battle, enduring in trenches, lying wounded or dead, standing behind barbed wire in prison camps. We see them firing weapons, flying aircraft, riding horses, driving the first primitive tanks, sharing cigarettes and coffee, sleeping, wearing gas masks. We also see some photos from the homefront: laborers in a munitions factory, refugees on the road, a French child weeping in front of a damaged piano in the street. Most people we see are Everyman and Everywoman, but there are some arresting images of T.E. Lawrence, Kaiser Wilhelm and Baron von Richthofen (the Red Baron), among other notables. (Some of Lawrence’s own photographs are included.) The editors provide images of ships at sea—including submarines—of airplanes on the ground and aloft, of a zeppelin floating only feet above the ground. But what most depresses as the images amass their enormous cumulative power is the destruction—of life (9 million dead), of health (countless wounded), of property (a Madonna nearly knocked from the roof of a church) and of the natural world (forests fractured)—and some surprising beauty: artillery shells in flight by night.

Beauty and horror contend for dominance on nearly every powerful page.

ANIMALS OF THE WORLD
by Richard Lynn
Nonfiction

THE PITY OF WAR
by Niall Ferguson
Nonfiction