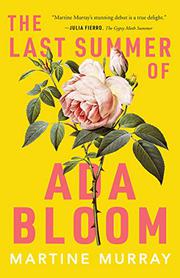 THE LAST SUMMER OF ADA BLOOM

A family begins to come apart at the seams over the course of a summer in a small Australian town in the early 1980s.

Young Ada Bloom, a dreamy child prone to “looking deeply into things and making up mysteries,” finds her world turned upside down when she stumbles upon her father, Mike, in flagrante delicto with family friend Susie Layton. But Mike’s secret, which Ada shares with her beloved older sister, Tilly, only widens the cracks in the foundation of the Bloom family. Self-absorbed matriarch Martha favors cricket-star son Ben at the expense of Tilly and struggles to be a loving mother to her children while concealing her own dark secret. Tilly, desperate to escape her mother, dreams of Melbourne and her dreamy crush, Raff Cavallo. In her first novel for adults, Murray (Marsh and Me, 2019) paints a vivid picture of the complications of family life and particularly of childhood. While Murray’s adult characters can feel static, her younger protagonists, Tilly and Ada in particular, are immediately gripping. Murray deftly illustrates Tilly’s internal contradictions; at once a rebellious teenager and a young girl frightened of the future, she is startled by her own declaration that she hopes to leave her small hometown. Her spontaneous announcement feels “like a reach for the self she wanted to be, the self that had tottered forward.” Ada’s disillusionment with her father is similarly balanced by a stubborn belief in the world’s beauty and her own force of will; Mike despairs at his cynicism in the face of Ada’s “own raw little love.” Regrettably, the plot loses steam instead of building to a satisfying climax. Nevertheless, there is much here to admire.

An empathetic family story that works best when illuminating the inner lives of its young female protagonists.

THE PERKS OF BEING A WALLFLOWER
by Stephen Chbosky
Fiction