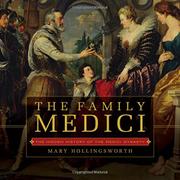 A fascinating warts-and-all history of the rise and fall of the Medici.

Hollingsworth (The Borgias: History’s Most Notorious Dynasty, 2011, etc.) effectively debunks the myths surrounding this legendary family, from the first moneylenders who moved into Florence in the 13th century through the end of the dynasty in 1737. Throughout the centuries, the author amply shows, the Medici lied, cheated, inveigled, and sweet-talked their way into absolute diplomatic and political power. They built up their banking business through the generations, and it became the basis for the family wealth. The Medicis understood the power of local politics and used their money to control it until Florence was no longer a republic but rather a dictatorship. Some of the best elements of this eye-opening book are the casts of characters and their relationships, which begin each chapter. Since so many Medici shared the same first name, these lists are extremely helpful in keeping the players straight. Equally illuminating are the dozens of illustrations. A major event in the family’s history occurred in 1420, when Giovanni di Bicci relinquished control of the bank to his sons, Cosimo and Lorenzo, who, despite his later appellation of “Magnificent,” was an inexperienced playboy who lacked political acumen. His blatant embezzling, plus the decline of the economy, gave rise to the attacks of Savonarola on the materialism and corruption of his administration. Hollingsworth also points out that Florence was not the only important city during the Renaissance; Milan, Rome, Venice, Naples, and Mantua were also significant. Florence certainly profited from the architects, artists, and writers of the period, but the Medici’s use of those artists was for the greater glory of Medici, not Florence. The true builder, Cosimo I, came to power in 1544 and became the first Grand Duke of Tuscany. He grew the economy and city and laid the foundation for the persisting perception of Medici greatness.

A vital acquisition for anyone who studies the Renaissance and seeks the true role of the Medici in the history of Florence.

THE MEDICI
by Paul Strathern
Nonfiction

MURDER OF A MEDICI PRINCESS
by Caroline P. Murphy
Nonfiction

THE BLACK PRINCE OF FLORENCE
by Catherine Fletcher
Newsletter sign-up