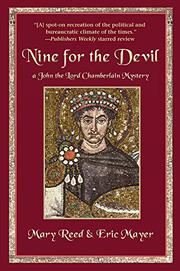 NINE FOR THE DEVIL

How can you find a killer who doesn’t exist?

Much loathed roman empress Theodora wastes away from disease, her husband Justinian constantly by her side, her attendants Vesta and Kuria fetching and fretting, Gaius the court physician prescribing potions, her best friend Antonina sending in get-well packets and various clerics offering up prayers for her. Nonetheless, she succumbs, and Justinian, demented with grief, calls in John, his Lord Chamberlain, and demands that he identify her murderer. With his wife off to assist their daughter in childbirth and his aged manservant Peter practically at death’s door, John alone must deal with the enmity between Christians and Mithranians, generals with political aspirations and lovers whose romances Theodora had manipulated. Did someone poison the empress? The palace gardens were rife with foxglove, and almost everyone had access to it. The palace torturers heat up their instruments, and the palace guards knock on doors in the dead of night to send possible suspects to the dungeons. John’s best friends lie to him, and the emperor has him in his sights as his wife’s nemesis until John, once again communing with Zoe, the little girl depicted on a mosaic in his home, pinpoints exactly by whose hand Theodora died.

Whores, beggars, lawyers, even a tax collector and a pope wander around Constantinople’s back alleys, brothels, kitchens and church sanctum sanctorums. What a relief for John (Eight for Eternity, 2010, etc.) to be finally freed of his duties and prepare to take his household off to Greece.

AN EMPIRE FOR RAVENS
by Mary Reed
Mystery

SEVEN FOR A SECRET
by Mary Reed
Fiction

TWO FOR JOY
by Mary Reed

AN EMPIRE FOR RAVENS
by Mary Reed
Mystery

SEVEN FOR A SECRET
by Mary Reed
Fiction

TWO FOR JOY
by Mary Reed

A GLADIATOR DIES ONLY ONCE
by Steven Saylor
Fiction