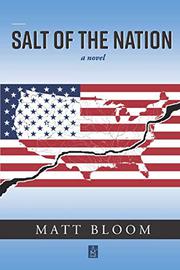 SALT OF THE NATION

In Bloom’s satire, a New Jersey man punches out a Republican senator campaigning for the presidency and becomes a national sensation.

Harry McBride is an ornery gravel worker in New Jersey. Just like his father who left him, his “prospects of escape diminish[ed] with each year spent swinging that big scoop shovel.” When he has the opportunity to shake the hand of Idaho Sen. Joseph P. Landon, a “true blue Republican” running for president, he clocks him in the face without so much as uttering a word. A stunned Landon ends up in the hospital with a broken nose and tailbone, and Harry somehow eludes capture by Secret Service agents and flees with the intention of making it to Mexico. Grover Budd, a bombastic radio personality clearly modeled on Rush Limbaugh, tries to demonize Harry, suggesting he’s part of a conspiracy organized by the Democratic Party to humiliate Landon. But Harry becomes a huge hit, his skyrocketing popularity fueled by social media. The principal reason he isn’t immediately caught? Most people are unwilling to turn him in. As one political strategist succinctly puts it, Harry encapsulates all the things the public at large is fed up with: “Of politicians and lobbyists, of backroom deals and huge corporations getting all the breaks while they cheat and exploit people like him. He’s sick and tired of all that and he’s sick and tired of being sick and tired.” Capturing this feeling of cultural frustration is one of Bloom’s (Hello, My Name Is Bunny!, 2018, etc.) chief strengths. At first, Harry seems unsure why he assaulted the senator, but that ambiguity isn’t ambivalence—like the electorate of which he is a microcosm, he’s seething with anger. The author masterfully allows that contempt and confusion to cohabitate within the story. Budd’s character is the one misstep—he’s drawn hyperbolically into a cartoon caricature, especially conspicuous during a grim sex scene. However, that lack of sensitivity is only so obvious precisely because it’s such a stark departure from the thoughtfulness of the rest of the book.

A rollicking, funny, surprisingly thoughtful sendup of the current climate of political discontent.