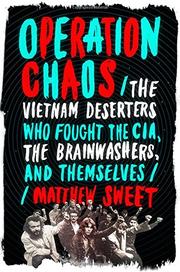 The Vietnam Deserters Who Fought the CIA, the Brainwashers, and Themselves
by Matthew Sweet
BUY NOW FROM
AMAZON
BARNES & NOBLE
LOCAL BOOKSELLER
GET WEEKLY BOOK RECOMMENDATIONS:

Among the lesser-known effects of the Vietnam War was the desertion of a large number of American servicemen, many of whom made their way to Sweden.

Newsweek International contributing editor Sweet (West End Front: The Wartime Secrets of London's Grand Hotels, 2011, etc.) begins with the defections of several men in 1968. In Japan, Mark Shapiro left his hotel and went to a safe house run by a Japanese anti-war group that put him on a Russian ship, eventually ending up in Stockholm. Shapiro quickly became a leader in the deserter community. Like the others Sweet interviewed nearly 50 years afterward, Shapiro is cagey about what he wants to tell about those days. The broad story is fairly clear, though. The deserters included anti-war idealists along with a fair number who saw desertion as their best way to get out of an increasingly impossible situation in Vietnam. The author does his best to record the different factions involved, as well as the attitude of the Swedes. At first, they welcomed the Americans as principled opponents of a colonial war, but they gradually became disillusioned. There were also a number of outside forces seeking to capitalize on the deserters: the Soviet Union, the international anti-war movement, the U.S. government, and others who saw them as tokens in a larger game. Sweet puts the spotlight on Lyndon LaRouche, whose conspiracy theories took hold among the deserters, following several of them who became members of his cultlike following. The author presents a wealth of intriguing stories about a largely unknown segment of the 1960s counterculture. Unfortunately, the presentation is somewhat disjointed, as Sweet jumps among a variety of perspectives. Readers looking for a neat conclusion to the deserters’ story will likely be disappointed; the tale is ongoing, and the participants have gone in different directions. The shift from the anti-war story to the rise of the LaRouche cult, while implicit in the material, reads like an unannounced detour.

Full of fascinating material but fails to gel as a whole.