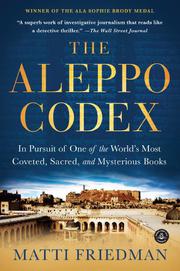 The True Story of Obesession, Faith, and The International Pursuit of an Ancient Bible
by Matti Friedman
BUY NOW FROM
AMAZON
BARNES & NOBLE
LOCAL BOOKSELLER
GET WEEKLY BOOK RECOMMENDATIONS:

A unique 1,000-year-old book is the pursued object of this scriptural detective story.

Inscribed with precision on vellum in the 10th century, the book known as the Crown of Aleppo has been, over the centuries, the most authoritative version of the Hebrew Bible. Produced by a sect that owed fealty solely to the written Word, the Crown survived the Crusades in Jerusalem. In the outskirts of Cairo in the 12th century, it was studied by the great physician-philosopher Maimonides. It traveled eventually to Aleppo, Syria, where it was reverently safeguarded in a synagogue. That history is not disputed. But in 1947, when the establishment of the State of Israel was ratified by the UN, an anti-Semitic riot erupted and the Aleppo synagogue was torched and sacked. The sacred text was saved, hidden with a Muslim merchant, transported covertly to Turkey and eventually brought back to Jerusalem and the new Jewish nation. Nevertheless, it was not a happy ending. Only three-fifths of the Crown ended in the hands of the government caretakers. Absent was the Pentateuch, the Five Books of Moses. The dramatic story of the book and the search for the missing pages attracted a president of Israel, undercover agents, specialists and colorful and wealthy dealers in ancient texts. There were false trails, lies and deaths. The best theory: The central jewels of the Aleppo Crown were taken after it reached Jerusalem. After more than half a century, the pages have still not been recovered, but AP correspondent Friedman is fairly sure who took them, naming a learned, highly placed government official, a sage collector could not resist the remarkable text. As the author wryly concludes, the “page with the passage Thou shalt not steal was stolen. Also missing are the commandments not to bear false witness, covet another’s property, or commit murder”—all violated, he notes in his sharply etched story of the Aleppo Codex.

Through the Levantine haze and a millennium of safekeeping, a carefully paced narrative of purloined Judaica.

SPIES OF NO COUNTRY
by Matti Friedman
Nonfiction