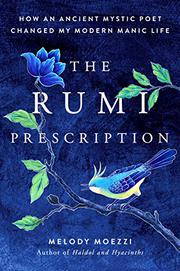 In a book that is more memoir than how-to manual, Moezzi (Haldol and Hyacinths: A Bipolar Life, 2014, etc.) chronicles her effort to apply Rumi’s 13th-century poetry to her 21st-century life.

Some readers may be surprised that the bestselling poet in the United States is a Muslim mystic who died nearly 750 years ago. Moezzi, however, isn’t the least bit stunned that Rumi’s words resonate with contemporary Western readers; it just took her a while to embrace them herself. She grew up in Ohio “dodging dead Persian poets” because her father “is a tried-and-true Rumi addict, and like most children of addicts, I grew up resenting the object of my father’s addiction.” But as an adult, the author decided to mine the Sufi mystic’s poetry to seek remedies for some of her own modern maladies—e.g. anxiety, fear, etc.—and found his words life-changing. Each of the chapters begins with a diagnosis and ends with a prescription, featuring stanzas of Rumi’s work that Moezzi translated and studied with her father. Though Rumi's poetry and its impact on her life are noteworthy, there are two narrative elements that stand out more. First, the author’s prose offers an intimate, endearing look at her relationship with her father. Second, Moezzi weaves throughout the narrative discussions of her interminable efforts to destigmatize both Islam and mental illness—not in a self-promoting way but as an advocate for herself and others; the book could shatter a variety of prejudices and stereotypes. Furthermore, the author’s translation of Rumi’s poetry will appeal to many readers because it’s well distilled and reads much like a series of aphorisms. Moezzi doesn’t claim to fully understand or precisely apply Rumi’s ancient wisdom; she’s simply telling the story of how his body of work has influenced her life.

A heartening narrative of family, transformation, and courage.