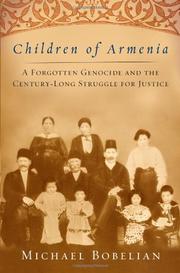 Lawyer and journalist Bobelian opens his first book with a painful description of the Ottoman government-sanctioned murder of more than a million Armenians during World War I. Unlike the Holocaust, this was headline news as it happened. Newspapers expressed horror; governments protested; the U.S. government and influential charitable organizations devoted themselves to Armenian relief. In 1918, the Allies forced the defeated Turks to try those responsible, but the government dragged its feet until occupation forces withdrew. Later, Armenian nationalists murdered several key officials, but the new Turkish nation erased the genocide from its history and still vehemently denies that it occurred. As a potential market during the 1920s and bulwark against communism during the Cold War, Turkey became an important U.S. ally. American leaders repeatedly expressed doubt that the genocide occurred, and Congress defeated a resolution supporting Armenian aims as late as 1990. His people lack the numbers and political clout of Jews fighting for Holocaust victims, notes Bobelian, so Armenian victories have been pitiful in comparison. In recent years, U.S. and European governments have denounced the genocide, but it seems unlikely matters will proceed further. Bobelian holds up Germany’s apology and reparations for the Holocaust as a reasonable goal, but he neglects to add that this behavior is unique. Nations guilty of terrible atrocities, including present-day Japan, Russia, China and Serbia, generally refuse to admit them, and Turkey is unlikely to break the mold.

ON THE MONSTER'S BACK
by Robert D. Lamson
Indie

FOUR YEARS IN THE MOUNTAINS OF KURDISTAN
by Aram Haigaz
Nonfiction