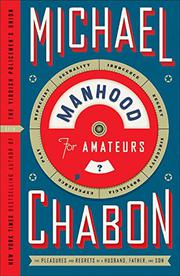 The Pleasures and Regrets of a Husband, Father, and Son
by Michael Chabon
BUY NOW FROM
AMAZON
BARNES & NOBLE
LOCAL BOOKSELLER
GET WEEKLY BOOK RECOMMENDATIONS:

In modern classics like The Amazing Adventures of Kavalier & Clay (2000) and The Yiddish Policemen’s Union (2007), Chabon (Gentlemen of the Road, 2007, etc.) gave genre writing literary heft, and he does much the same here. His material is the stuff of folksy, small-town newspaper columns, but he applies an unusual level of wit and candor to the form. In his essay on Legos, he drills deep into the tactile pleasures they provided him as a child and the frustrations that their current complex, imagination-killing designs give him as a parent. Writing about cooking, he patiently runs through the details of the first crumb cake he successfully baked as a nine-year-old. “A Woman of Valor” looks at Big Barda, a little-loved comic-book superheroine. It’s a sharp essay on the definition of sincerely powerful women and why they rarely appear in pop culture. Chabon’s tone is nostalgic, funny and self-deprecating, though the memories are often bittersweet: the strange, brief fling he had with a friend of his mother’s when he was 15, bad experiences with women his own age, a botched first marriage, a drug-addicted acquaintance slipping away from his efforts to help. Chabon discusses life as a writer only glancingly. He briefly notes, for instance, his struggle to create an authentic female character in Kavalier & Clay—eventually gutting 400 pages of effort—within the context of misogyny in pop culture, and mentions David Foster Wallace’s suicide only as a launchpad for an essay on his wife’s bout with depression. Even his defense of MFAs says more about the emotional maturity he received pursuing the degree than anything about craft. Only once, in a forced bit of punditry about Jose Canseco and steroids, is he off his game. He’d much rather discuss sharing Doctor Who with his kids, and he’s clearly having so much fun being a dad—and thinking about what it means to be a dad—that it’s a wonder he has time to create such excellent novels.

Wry and heartfelt, Chabon’s riffs uncover brand-new insights in even the most quotidian subjects.

FIGHT OF THE CENTURY
by Michael Chabon
Nonfiction

KINGDOM OF OLIVES AND ASH
by Michael Chabon
Fiction

UP UP, DOWN DOWN
by Cheston Knapp
Nonfiction