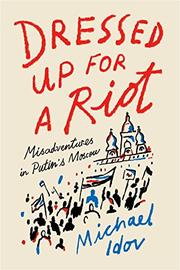 DRESSED UP FOR A RIOT

A sometimes-jokey but insightful insider’s guide to modern Russia and the Russian mind.

Ask a Russian what he or she is proudest of in the nation’s history, and the answer will likely be, first, defeating the Nazis and, second, annexing Crimea. “A petty land grab,” writes Latvia-born, Berlin-based magazine editor and journalist Idov (Ground Up, 2009, etc.), “beat out Sputnik and Yuri Gagarin’s space flights, ‘the achievement of Russian science,’ and ‘great Russian literature.’ ” These hallmarks of a triumphant Russia are easily played, as Vladimir Putin has long known. Idov, who ran GQ Russia from 2012 to 2014—he writes entertainingly of the human resources nightmare of trying to fire feckless staffers—is well-versed in the politics of hipster culture as well as the upper echelons of government. The band Pussy Riot may have been adopted as mascots of punky resistance by U2 and Madonna, but at home they’re seen differently, for “no stadium-playing Russian musician…would feel professional affinity with a group of masked activists running around quoting Julia Kristeva.” The Putin government’s take, meanwhile, like that of many Russians, is that the band’s Western supporters are all enemies of the state. “In the Russian mind,” writes Idov, “[Red Hot Chili Peppers singer] Anthony Kiedis takes direct dictation from Foggy Bottom.” Roaming into matters such as the recent conflict with Ukraine over territorial claims, the author considers broadly different perceptions of the world between ordinary Russians and Westerners—as he notes, even the word “Ukraine” means very different things in Ukrainian and Russian. Perhaps most newsworthy, speaking of different perceptions, he offers a sighting of Donald Trump Jr. in Moscow and ventures the thought that the Trumps don’t consider Russians of their circle to be foreign agents precisely because “they belong to the same global class, that of second-rate nightclubby strivers; they are all compatriots in a supranational state of poshlust.”

Breezy but informative and especially useful for readers contemplating a move to Russia for business or pleasure.

THE FUTURE IS HISTORY
by Masha Gessen
Newsletter sign-up