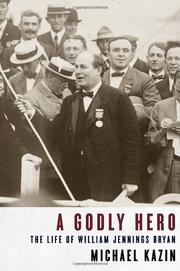 A biography of populist politician William Jennings Bryan that demonstrates that progressive evangelicalism is nothing new.

Kazin (History/Georgetown; The Populist Persuasion, 1995, etc.) summarizes in just one chapter Bryan’s first 30 years: birth in 1860, Illinois childhood, study of law, marriage to Mary Elizabeth Baird. The biographer’s real interest lies in Bryan’s public career, jumping quickly into Bryan’s move to Nebraska and subsequent terms in Congress, beginning in 1890. The author argues that his subject was the first politician to envision a government that, through its expansive powers, could do great things for ordinary people. (Well, some ordinary people: Bryan’s concern extended only to white folks.) His populism sprang from his Christianity, and if his “progressive interpretation of the Gospels” never got him elected to the White House (he ran for president three times), it did earn him the enthusiastic devotion of tens of thousands of Americans. A gifted orator, Bryan frequently lectured on tariffs and the gold standard. Later, he took up the causes of anti-imperialism, prohibition and women’s suffrage; as Woodrow Wilson’s Secretary of State, he was a strong advocate of peace. Americans today, however, remember him mostly as the diehard opponent of evolution depicted in the popular play Inherit The Wind. Kazin revisits the well-known scene from the 1925 Scopes trial, in which Bryan, lawyer for the prosecution, actually took the stand as a witness and wilted under Clarence Darrow’s sharp-tongued questions about biblical literalism. (Bryan died six days later.) But Kazin also usefully contextualizes Bryan’s hostility toward the theory of evolution: In addition to believing that it “opened the door wide to immoral behavior,” he worried about the slippery slope from Darwinism to eugenics.

History that remains solidly relevant today, and a real eye-opener for anyone who thinks that fierce debates over tax reform, corporate power, imperialism and evolution are recent developments in American politics and culture.

WE OWN THE FUTURE
by Kate Aronoff
Nonfiction

THE POPULIST PERSUASION
by Michael Kazin

THE TRIUMPH OF WILLIAM MCKINLEY
by Karl Rove
Nonfiction

THE STORY OF SILVER
by William L. Silber
Nonfiction