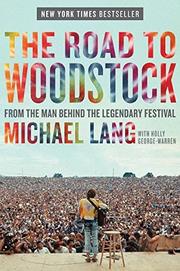 THE ROAD TO WOODSTOCK

Totally rocking firsthand account of Woodstock, “a test of whether people of our generation really believed in one another and the world we were struggling to create.”

In addition to providing an engaging record of the sights and sounds of the festival, Lang offers an in-depth look at the business behind the creation and execution of the event that all but defined the late 1960s. Now considered to be among the most innovative promoters of pop-culture events, Lang was a wide-eyed, just-out-of-NYU idealist who, until 1969, had put together a handful of concerts and exactly one major festival. But he was—and probably still is—the kind of guy who, once he sets his mind to it, could get anything done. The author is a generous raconteur with a good memory for specifics, but what elevates this book above the level of most rock memoirs is the inclusion of voices other than Lang’s—including scenesters and key Woodstock players like Jimi Hendrix, Roger Daltrey, Pete Townshend, Jerry Garcia, Abbie Hoffman, John Sebastian, Greil Marcus and Wavy Gravy. “The full story stretches from Brooklyn, to Greenwich Village, to Coconut Grove, and finally to upstate New York,” writes the author, “encompassing the individual and collective experiences of those three days and nights.”

Well-written, informative and tons of fun, Lang’s book will be appreciated by rockers and musicologists of all ages.