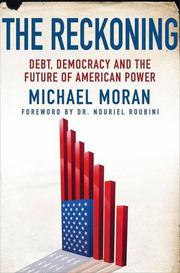 Moran, a geopolitics and economics writer for Slate and other publications, is far more sophisticated than that opening declaration suggests, but in the main his arguments line up with it. Two economically catastrophic events took place on Bush’s watch or even at his instigation—the “disastrous Iraq War” is one, “U.S.-inspired economic policies that encouraged global capitalism to run riot” the other. “The damage,” writes the author, “will haunt America for a generation.” As he notes, Americans have long tended to shrug off the costs of war as simply the costs of doing business as global policeman and superpower, but there are no funds left for such behavior anymore—much as those who are now calling for war with Iran might pretend otherwise. That said, Moran does not necessarily project a decline in American influence around the globe; we may be broke, but we also have “the world’s largest domestic consumer market, as well as a commanding lead in many of the disruptive technologies that still drive product innovation.” He does not add the caveat, “for the moment,” though he does warn that choosing another leader like Bush would hasten Ragnarok, or at least its fiscal equivalent. Parting ways with other critics from the progressive side of the aisle, Moran does allow that debt will have to be curbed and the political will found not just to do that, but also to convey to the rest of the world—especially creditors—that we’re serious. That will come with some cost, personal and national, and it will almost certainly require the U.S. to shed its “superpower cape.”

For policy and financial wonks, a smart, bracing and sobering read; for voters, fair warning about possible outcomes of the looming November elections.