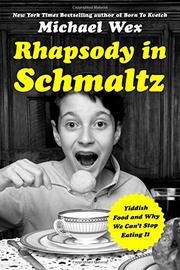 An enticing tour of Judaism’s culinary past.

Wex (How to Be a Mentsh (and Not a Shmuck), 2009, etc.) brings lighthearted humor and his considerable expertise on Jewish culture to a wide-ranging look at Jewish food, from biblical dietary restrictions to New York bagels. The Bible forbade Israelites to mix meat and dairy products, eat leavened bread on Passover, and cook on the Sabbath. The last injunction led to the invention of a stew called cholent, which Jews prepared on Friday afternoon and left heating overnight. The meat came from a list of permitted animals: only “ruminants with cloven hoofs.” And those must be killed while still conscious, and bled thoroughly, in the koshering process. Permitted fish must have scales and fins; insects, with the exceptions of locusts, grasshoppers, and crickets, were not allowed. Nobody, Wex writes, “ancient or modern, Jewish or gentile, has the vaguest idea of why the forbidden species are forbidden.” Some ingredients became pervasive in dishes from many areas, especially garlic, onions, and the delectable schmaltz: rendered fat from chickens or, preferably, geese. Although Wex gives few actual recipes, he does provide one for schmaltz, “the champagne of animal fat.” The author explains the popularity of kishka, or stuffed beef intestine tsimmes, a fruit and vegetable stew; the braided challah; chicken soup, which “has served as a specific for what ails the Jews for close to two millennia”; and the latkes (potato pancakes), blintzes (crepes often stuffed with cheese), and bagels that have transcended Jewish cooking and made their ways into mainstream culture. Wex takes on the thorny question of where bagels originated and what constitutes the authentic variety. The bagel, he writes, “has managed the near unimaginable feat of actually becoming American” despite having “half the shelf life of a fruit fly.” But topping one with cream cheese and lox began only in the 1930s.

THE STORY OF YIDDISH
by Neal Karlen
Newsletter sign-up