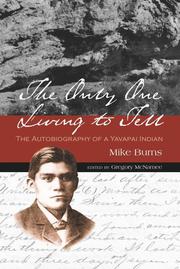 THE ONLY ONE LIVING TO TELL

One shattered life in what was to become Arizona in the second half of the 19th century, on a personal scale and from a native perspective.

Burns started life as Hoomothya, aka Wet Nose, a child of one of the tribal branches gathered under the name Yavapai. In 1872, when he was about eight years old, his family was murdered at the Skeleton Cave Massacre, and Hoomothya was taken by Capt. James Burns, in whose home he fell somewhere between a ward and a servant, and renamed Mike Burns. This is the story of a swath of his life, though concentrating on the years 1872–1886, and told in his words. Aided by Bloomsbury Review and Encyclopaedia Britannica contributing editor McNamee’s (Aelian's On the Nature of Animals, 2011, etc.) light editorial touch, those words have an unfiltered, sand-blasted polish, spare and well-chosen and strung with piquant atmospherics and a decided sense of transport.  “Burns lived in two worlds, and he was at home in neither,” writes McNamee, but he did spend many years as a scout for the United States military, where he took part in the push westward. There is plenty of mayhem and bloodshed, but what gives this memoir its peerless value is the potency and immediacy of the observations. This might be as quotidian as herding chickens, or as appalling as a man shot at such close range his clothes caught on fire, or as evocative as the place descriptions, moving camp, “following a big wash upstream toward the Superstition Mountains near the Gold Field.” Threaded throughout is the mistreatment and murder of native populations that Burns, despite being a scout, could or would hardly ignore.

An ethnographic and historical prize from “that anthropological desideratum above all others—the native point of view.”