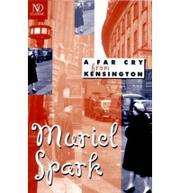 A FAR CRY FROM KENSINGTON

With all the wit and stylistic aplomb we've come to expect of her, Spark casts a withering glance at some fringe characters who people London literary life at mid-century. But the merely odd—goofy publishers, fatuous editors, etc.—takes an evil turn, as this delightful comedy of manners reveals a darker tale of obsessions and revenge. What keeps things relatively light here is Spark's unflappable narrator, a young war widow who proves to be a talented "general do-all" for a number of publishing houses. Though only 28, Mrs. Hawkins is treated as "a matronly goddess of wisdom" both by her colleagues at work and her fellow boarders at a rooming house in So. Kensington. A compulsive advice-giver, this "remarkably reliable woman" also takes on the troubles of others, partly because her own obesity deprives her of a rich private life. All of her problems begin, however, when she lets slip a devastating criticism of one particular literary ne'er-do-well, Hector Bartlett, a hack whom she terms a "pisseur de copie"—"a urinator of journalistic copy." Her refusal to recant this catchy epithet gets her fired from her first job with a failing firm run by a sodden embezzler. Her next employer, the house of Mackintosh & Tooley, hopes to publish the work of Bartlett's mentor, a talented novelist who would just as soon be rid of him. But Mrs. Hawkins, all the while peeling off pounds, refuses to edit Bartlett's execrable manuscript, The Eternal Quest. Though she eventually finds work as managing editor of a highbrow quarterly run by two American refugees from McCarthyism, the slimmed-down Mrs. Hawkins—who now calls herself by her first name, Nancy—discovers that Bartlett is behind a number of strange doings back at the rooming house. A bizarre series of events involving her fellow boarder, a nervous Polish dressmaker, leads to the latter's suicide, the result of Bartlett's psychosexual manipulations, all of which have been unknown to Nancy, upon whom he hoped to wreak ultimate vengeance. A postscript set 30 years later confirms the power of her accurate epithet for the loathsome miscreant. Spark treats the reader to Mrs. Hawkins' common-sensical advice on everything from weight-loss and insomnia to marriage and religion. But the greater pleasure comes from the surprising tidiness of this gently moral tale.
Pub Date: July 18th, 1988
ISBN: 9780811214575
Publisher: Houghton Mifflin
Review Posted Online: Sept. 18th, 2013
Kirkus Reviews Issue: June 15th, 1988


A NOVEL FOR EVERYTHING (AND WE MEAN EVERYTHING) THAT AILS YOU:

ME BEFORE YOU
by Jojo Moyes
Fiction

ONE FLEW OVER THE CUCKOO'S NEST
by Ken Kesey
Fiction

THE SHINING
by Stephen King
Fiction

THERE BUT FOR THE
by Ali Smith
Fiction

A FAR CRY FROM KENSINGTON
by Muriel Spark
Fiction

OPEN TO THE PUBLIC
by Muriel Spark
Fiction

REALITY AND DREAMS
by Muriel Spark