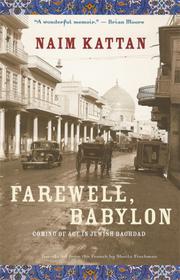 Judaism, community, friendship, love, Farhoud, and above all, reading and writing, form the core of Kattan’s vibrant telling of his upbringing in Jewish Baghdad during the mid-20th century.

The book is infused with vivid descriptions of the people and places the author, born in 1928, encountered from his school-age years through young adulthood and up until his departure for France in 1947. Some of his most reverential, emotional and poignant language is reserved for the recounting of his exposure to world literature and foreign languages and his relationship with Baghdad’s active literary community, which began to seriously develop when Kattan was only 13. At the same time, he movingly evokes the terror and transformative effects of the destructive and deadly May 1941 attacks against the Jews of Baghdad, which were at least in part fueled by the snowballing Nazi destruction of European Jewry. Until this Farhoud, Iraqi Jews had long lived in relative harmony with their Muslim and Christian neighbors, a peace that has not been restored since. As a teenager already emerging as a successful writer, Kattan navigated cultural divides. But while he was accepted by both Arabic and Jewish presses, he remained painfully aware of the possible repercussions of speaking in a Jewish dialect in Baghdad. The book functions as a loving homage to a time and community that has since virtually disappeared. It is written in tones that convey the wonderment, yearnings and joys of a boy who, in becoming a young man, discovers the meaning of deepening friendships, the first stirrings and fumbling pursuits of love and desire and the beauty of learning to read fluently in Arabic and French.

Beautifully written memories of a youth filled with literature, language, family, friendship, love, lust and a place that is no more.