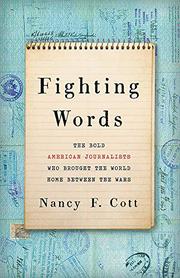 In an informative group biography, Cott (History/Harvard Univ.; Public Vows: A History of Marriage and the Nation, 2001, etc.) focuses on four foreign correspondents whose reporting, from 1920 to the 1940s, enlightened Americans about global events.

As the author notes, journalism was alive and well during this period; in 1920, 2,500 newspapers circulated 32 million copies each day. Large cities had four or more dailies in addition to Sunday papers, weeklies, monthlies, and many foreign-language and ethnic-group papers. Ninety-five percent of Americans read newspapers. Jobs in journalism were easy to get, and many young men and women—Hemingway, for one, went to Paris as a reporter for the Toronto Star—took the opportunity to travel, supported by a newspaper back home. Drawing on considerable archival and published material, Cott profiles Dorothy Thompson, Vincent James Sheean, John Gunther, and Rayna Raphaelson as representative of their profession. Excepting Raphaelson, whose career was cut short by her death in her early 30s, the other three serve well to illuminate the perils and triumphs of gathering foreign news. Raphaelson rebelled against the expectations of her upper-middle-class Jewish family to sail to China with no newspaper experience or job connections, but through dogged efforts, she reported fearlessly about China’s and Russia’s political upheavals. Nevertheless, her influence was never as broad as that of the other three writers, whose dispatches from Russia, Germany, Europe, and Palestine led to regular columns (Thompson, for example, contributed “On the Record” for the Herald Tribune, reaching some 8 million readers), radio broadcasts, lectures, and book deals. Sheean’s memoir Personal History, adapted as the 1940 movie Foreign Correspondent, gave rise to other memoirs in which journalists recounted their witnessing of international events. Gunther’s ambitious Inside Europe vividly portrayed Hitler, Mussolini, and Stalin. The book sold nearly 1,000 copies per week and was translated into 14 languages. Like Sheean and Thompson, Gunther became a celebrity and “a trusted source for whatever in the world Americans wanted to know.”

A revelatory history of a time when journalism was respected and vital.