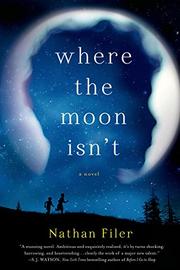 WHERE THE MOON ISN'T

A fatal accident forever marks the life of a young British man struggling with his own demons.

Originally published in the U.K. as The Shock of the Fall, this debut novel by mental health nurse Filer is a startlingly authentic portrayal of the rigors and tribulations of navigating the modern health care landscape while struggling with mental illness. The novel’s protagonist is Matthew Holmes, a fairly typical 19-year-old lad living in Bristol under the shadow of terrible grief. When Matt was very young, he and his brother Simon, who had Down syndrome, sneaked out one night, like boys do, and Simon died. Slowly, we learn that Matt now suffers from a potent form of schizophrenia, accompanied by command hallucinations that come in the voice of Matt’s dead brother. Filer ably captures what's going on in Matt’s head, and it’s not the gibbering, 12 Monkeys caricature that so often emerges from these kinds of tales. As Matt himself says, he may be mad, but he’s not an idiot. Even more interesting is that Matt’s story comes in the form of a diary, both hand-scribbled and hurriedly typed on a computer in the health care center where he seeks treatment and is given the plan. “It tells me exactly what I have to do with my days, like coming in for therapy groups here at Hope Road Day Centre, and what tablets I should take, and the injections, and who is responsible for what,” Matt says. “This is all written down for me. Then there is another plan that comes into play if I don’t stick to the first one. It follows me around, like a shadow. This is my life.” This is a terribly unsettling novel, but it works on many levels—as family drama, as a searing indictment of Western health care and as a confession.

A haunting story about how to mourn when the source of your grief will never go away.

Arrivals and Departures from Normal
by Lana Jean Rose
Children