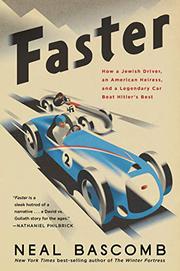 Auto racing takes on the von Clausewitz–ian guise of war by other means.

Early on in his reign, Hitler decided that it would be a key point of national pride to win the Grand Prix, with the Nazi propaganda machine obliging by developing the slogan, “a Mercedes-Benz victory is a German victory.” Hitler’s regime cultivated two drivers in particular, Bernd Rosemeyer and Rudi Caracciola, showering them with favors. France would have none of it, fielding a car, the Delahaye 145, that had an unlikely source, for the small firm that built it specialized in heavy trucks rather than fast cars. It had an unlikely patron, too: an American woman who loved to race and who selected as her driver a young man, René Dreyfus, who had been excluded from many races “because of his Jewish heritage.” When he was allowed to race, he soared. Bascomb (The Escape Artists: A Band of Daredevil Pilots and the Greatest Prison Break of the Great War, 2018, etc.) recounts an early race in which Dreyfus piloted a fresh-from-the-factory Maserati, his pit crew none other than the car’s namesake. Those early cars were dangerous: In a race from Paris to Madrid, more than a dozen drivers and onlookers were killed, and “there were too many injured to determine a casualty count with any accuracy.” Bascomb writes vigorously of the race at the heart of the book, with heart-pounding set pieces: “In the twelfth lap, Rudi crept up to René’s side, and the two almost locked together as they zigzagged around the course, neck and neck, neither giving way to the other.” René won, and Hitler was furious. René, now in the army, was sent to the Indy 500 to represent France in 1940 but was stranded in America when Germany invaded his homeland. One of the first acts of the invaders was to sweep up every bit of archival material related to his victory, hoping to rewrite the past.

A luminous book of sports history that explores a forgotten corner of the history of the Third Reich as well.