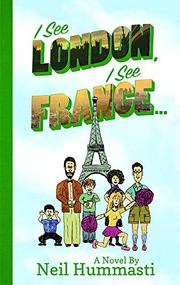 An eccentric American family goes on a European vacation and becomes entangled in a web of criminal conspiracy in this comic novel.

Victor Emmanuel Popper—the fictional author of this humorous “memoir”—is a mere 12 years old but confidently assures readers he “scored sinfully high on IQ tests.” He narrates this tale of an adventure gone wrong from the perch of nearly deranged precociousness, an often intoxicating brew of gimlet-eyed observations and slapstick surrealism. Victor decamps Seattle with his family—a “doubtful… group of cosmopolites”—on a 42-day “deluxe tour of Europe” that visits a litany of major cities, including London, Amsterdam, Cologne, and Vienna, among others. His entourage is an eclectic mix of oddities: His mother, Penny, is an art history professor–turned–astrology guru. His sister, Anna Karenina, is a 15-year-old “parody of teenagerness,” and his brother, Edgar Allan Poe, is a 5-year-old boy “already subject to violent mood swings.” Victor’s accompanying uncle is a psychiatrist, a “mad doctor” who hypnotizes the children when they’re in need of pacification: “You’re getting sleepy. TV is not real. The sitcoms are not funny, and the dramas contain material not suitable for children. When I count to three….” While leaving London, Victor’s father, Max, is detained by police under suspicion of smuggling Russian art icons and taken to Scotland Yard, apparently “manned principally by bumbling idiots.” Victor takes it upon himself to clear his father’s good name and undertakes an investigation of his own, convinced one of the other tour members is the true culprit. In this manic novel, Hummasti (Four Ways To Square a Circle, 2018) has an extraordinarily well developed sense of life’s absurdity and finds traces of it in every crevasse of human affairs. In addition, his indefatigable inventiveness can be genuinely funny, though the relentlessness of the humor—there’s hardly a sentence without a one-liner—can become a bit exhausting. The comedy can also be schlocky—there is a pair of Australian lawyers named Mr. and Mrs. Dingo, a Greek called Mr. Zorba, and Max’s lawyer is Mr. Fitzfrisky.

A wildly amusing fictional memoir that sometimes tries too hard to be funny.