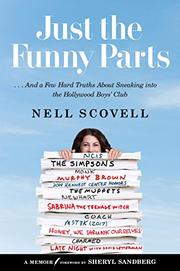 A TV writer reflects on carving out a career in male-dominated Hollywood.

Scovell, a veteran writer, producer, director, and show creator, minces few words when skewering the toxic atmosphere for female talent in Hollywood. In her frank memoir, the author, who collaborated with Sheryl Sandberg on Lean In, escorts readers through the beginnings of her career writing for SPY magazine in the 1980s while unpacking the emotional baggage of two botched marriages. At 26, she spontaneously flew from New York to Los Angeles to meet with an executive producer only to be placed in the first of many competitive, sexist, “penis party” writing teams, learning one industry lesson after another. A talent for comedic timing and impressive spec scriptwriting ushered Scovell into the writers’ meetings of some of TV’s top programs over a career that now spans over three decades. She reflects on the mixed success of scriptwriting for an impressive array of popular programs, including The Simpsons, Coach, and Murphy Brown. She also created and produced Sabrina the Teenage Witch and Charmed and even wrote jokes for Barack Obama and Hillary Clinton. “The ratio of fun versus not fun varies from show to show,” she acknowledges, commenting that “the people, the process, and the product” are the determining factors. As Scovell’s career matured and her confidence bloomed, so did her role as a wife and mother of two. Her fearlessness was clearly evidenced when the David Letterman sex scandal broke and the author made a controversial and risky career move by speaking out about a marked lack of gender diversity in the late-night TV arena. Photographs, newspaper mentions, and script clips further illuminate the author’s rise to prominence. While arguing that the industry still has a long way to go “in changing its casual acceptance of inappropriate behavior,” Scovell counts herself among the many who have made successful careers in show writing and creative collaboration.

A breezy, affably written amalgam of memoir, advice, and workplace survival guide from the front lines of the entertainment industry.

WHAT HAPPENS NEXT
by Marc Norman
Nonfiction