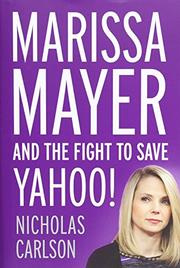 MARISSA MAYER AND THE FIGHT TO SAVE YAHOO!

The inside story of the cult of personality that surrounds the leadership of Silicon Valley’s technology behemoths.

Business Insider chief correspondent Carlson’s complex study of Yahoo’s spectacular rise and turbulent fall is less gossipy than Ben Mezrich’s The Accidental Billionaires (2009) and more accurate than that book’s adaptation, The Social Network, but it does carry that same strange feeling that it’s hard to believe these bizarre events transpired in one of the world’s largest companies. The first section recaps Yahoo’s rise while offering a parallel portrait of a shy 24-year-old engineer who became nearly indispensable to Google founders Larry Page and Sergey Brin. There’s even a cameo by Mark Zuckerberg, who brazenly demanded $1 billion from Yahoo for Facebook in 2006. There’s also a reference to “Project Godfather,” an early attempt to wipe out other search firms from the market, and the story of CEO Carole Bartz, who was fired over the phone. The remainder of the book focuses on the aforementioned engineer, Marissa Mayer, who was handed the reins of the multibillion-dollar company at the age of 37, with no practical experience managing finances, human resources or global operations. Operating under the safety of Yahoo’s major investment in China’s Amazon-like site Alibaba, Mayer transformed from Yahoo’s savior to a CEO under siege, criticized by employees suffering under an arcane review system, under pressure from her board to fire thousands of people, and possibly running out of time to turn the company around. “If turning around a company is like building a bridge in the middle of a war zone, with bombs dropping out of the sky every minute, then Marissa Mayer was the lucky army engineer who got to build a bridge from Yahoo’s past to Yahoo’s future under perfect air cover—air cover provided by Alibaba,” writes the author in this page-turning account, which is thankfully light on jargon.

A well-researched, up-to-date story about a fight to define one famous company’s future.

IN THE PLEX
by Steven Levy
Nonfiction