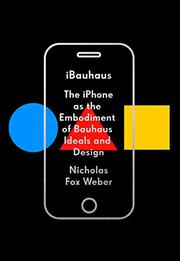 The iPhone as the Embodiment of Bauhaus Ideals and Design
by Nicholas Fox Weber
BUY NOW FROM
AMAZON
BARNES & NOBLE
LOCAL BOOKSELLER
GET WEEKLY BOOK RECOMMENDATIONS:

Having devoted decades of his professional life to the Bauhaus school of art and design, the author celebrates the iPhone as the perfect realization of that movement’s sensibility.

For Weber (The Bauhaus Group, 2009, etc.), Bauhaus is much more than a design collective that began a century ago in Germany, where “all in all, it would last only fourteen years.” It is more than the aesthetic principles that have been kept alive by adherents in the worlds of visual art and architecture. It is more, even, than a design for living, though it is very much that. It is a religion, a cosmology, a way of ordering and understanding the universe, a spirit that Weber traces from Plato—whose “best-known broad-sweeping profundity” was “the good is the beautiful”—through Steve Jobs, among the latest to apprehend that “design—capable of miracles, truthful and alluring—was the new religion.” Of course, this religion has a moral code: to serve the many rather than the elite with its simple beauty and to avoid any ostentatious filigree in its devotion to the streamlined essential. “In the 1970s, I devoured Bauhaus values at the source. I bridge the gap between two great epochs in the modernization of civilization,” writes the author, whose book bridges those eras as well. For more than four decades, Weber has served as executive director of the Josef and Anni Albers Foundation, keepers of the Bauhaus flame, founded by the couple who “were like a two-person religious sect. The Bauhaus had been the place where they had met and started to practice their faith.” Flash-forward over the decades, and we see the emergence of Steve Jobs as a kind of second coming, with the iPhone serving as “the perfect Bauhaus design.” The narrative contains more Bauhaus elements than most iPhone devotees have ever paused to consider, but the author makes a strong case that a revolution in modernist design has found fulfillment in contemporary culture.

An engaging and occasionally provocative analysis.

THE CLARKS OF COOPERSTOWN
by Nicholas Fox Weber
Nonfiction