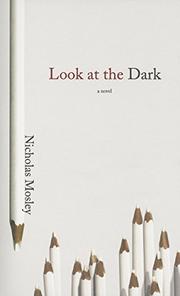 LOOK AT THE DARK

The veteran British author’s 15th novel is a discursive meditation characterized by signature strengths and weaknesses familiar from such predecessors as Hopeful Monsters (1991), The Hesperides Tree (2001) and Inventing God (2003).

It’s the first-person narrative of an unnamed British intellectual, formerly an anthropologist with a special interest in linguistics, who has made himself both famous and reviled for his stinging public denunciations of American imperialism. Arriving in New York City one year after 9/11, for a television interview, he’s seriously injured in a hit-and-run accident (though he believes the van that nearly killed him was a CIA vehicle). Presiding thereafter over the imminent demise of western civilization from his hospital bed, he’s visited by his first and second wives, and the adult son who’s making do as an employee of wife #1’s boyfriend, a powerful drug kingpin. Conversations, monologues and flashbacks emphasize the narrator’s bemusement over the mysteriousness of human beings (nicely encapsulated in a terrific little parable about a search for a set of missing keys), and his rather unoriginal conclusion that language is used by humans to conceal as well as understand themselves. This is arguably an unwise emphasis in a novel that’s composed much more of language than of characters and incidents. Only in memories of the narrator’s brief relationships with a teenaged Iranian girl and a woman who lost a leg to a landmine, in Africa, and in concluding encounters that follow his return to England, does this story’s resolute disdain for specificity yield to a focus on real human experience. The book is filled with crisp, graceful sentences and a smothering sense of last things approaching. In fact, Mosley, now in his 80s, appears to be offering a kind of summing-up.

As such, it commands some interest. As a novel, it’s redundant and inert.

CHILDREN OF DARKNESS AND LIGHT
by Nicholas Mosley
Nonfiction

RULES OF THE GAME, BEYOND THE PALE
by Nicholas Mosley
Newsletter sign-up